Seungyoon Choi: The Aleph of Paradox

“The uncertainties in my work are like the stars in the sky. Looking from a distance, it is just another point. Divulging the worlds inside me that are alike but not equal…”

Gallery Jeeum is pleased to present recent works by Seungyoon Choi that portray the prolific energy of the world with his expressive strokes and moderate colors. They are speculation and attention to the basic principles that constitute and operate the world where he creates his abstract language. The unique charm and dynamic energy from its aesthetic pleasure and gesture have yielded him firm patronage, and many companies have collaborated with him such as Samsung TV in 2019.

Choi has been expressing on canvas the duality and paradoxical phenomena in the world that he has pondered. While this seems fundamental and macroscopic, it is a question stemming from his own experience and perception in daily life. It is about the world and himself in the first place. Coupled with the concept of time, it has led him to reflect on paradoxes in life and death, flow and halts, and observation of small things in earthly life and its subtle emotions.

Gallery Jeeum features Choi once again since the ‘Blue Flower’ show in 2017. This solo exhibition finds significance in that the artist goes beyond his way of seeing the world from the perspective of others that has separated him from its reality. Instead, he now locates himself in it to establish a more organic relationship between him and the world. This includes sentiments based on his imagination of future society with artificial intelligence and digital reality in which the continuum of his thoughts thus far is embodied as the ‘world ahead’. His oeuvre until now, including this show and the profile of space and time series in the previous years, is very consistent and it defines the theme of expanding and narrating his attitude towards the world. On view will be about 30 new paintings that focus on Me and the World series, which is the title of the work and the theme of this exhibition.

It is notable that his work expressively renders the slice of life and the world that cannot be defined singularly, and sublimates them into liberating and dynamic energy. This energy seems to originate from the compression and movement of time created by the overlap of brush strokes. The ideas of individual, object, and subject do not predate, but it may result from various forces or flows of attributes that constitute them. His work shows a more refined sensibility with a solid structure to move away from existential anxiety. The possibility of “I” that leaps away from the existing notions to affirm and create life is presented to encounter. The exhibition pays attention to this idea and poses another reflection on the world and ourselves.

“The world I’ve ever pondered was missing something… If you think about it, the world cannot be completed without the piece of “I”… Now, I’m going to start talking about the World and I.” 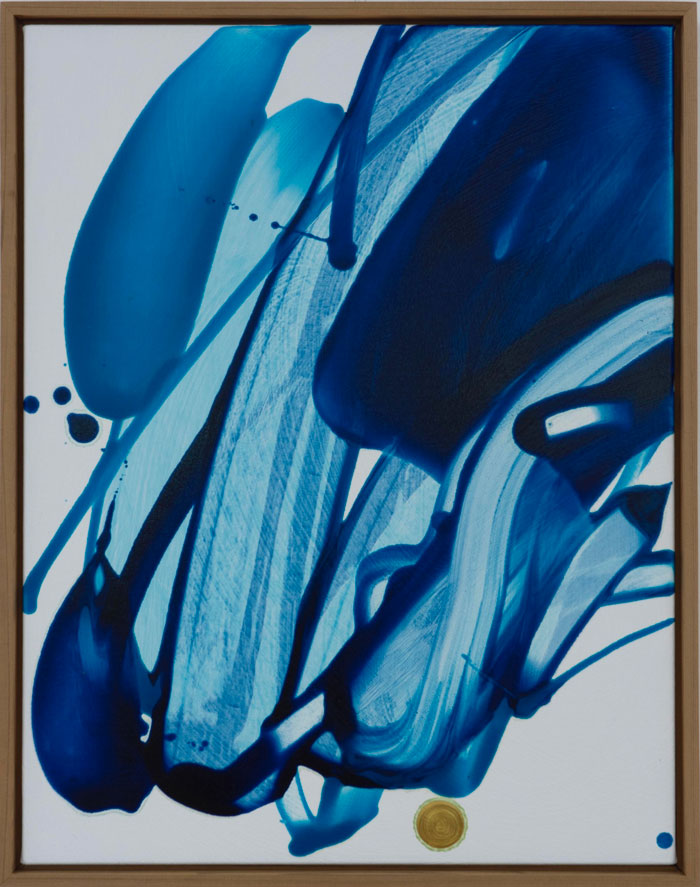 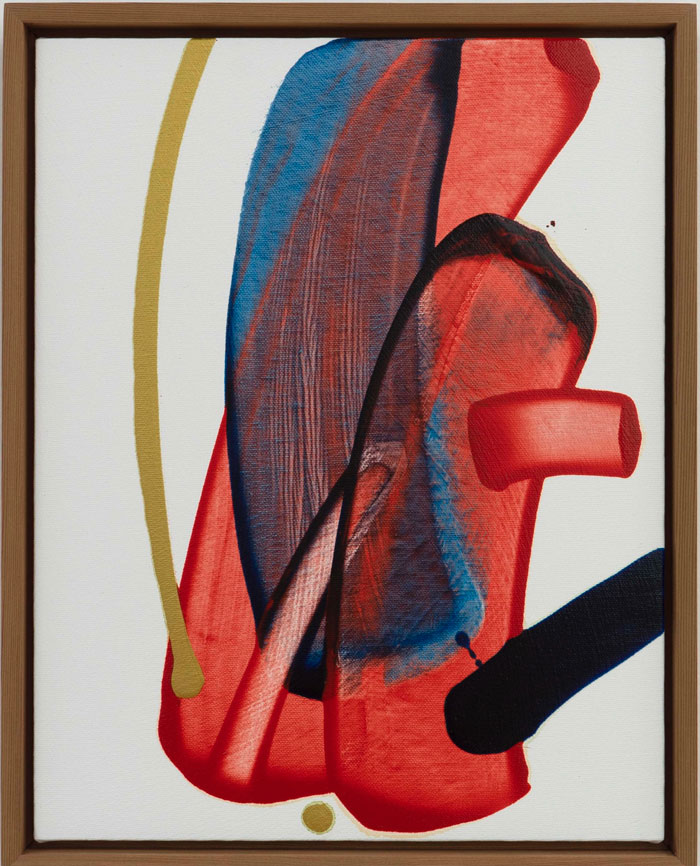 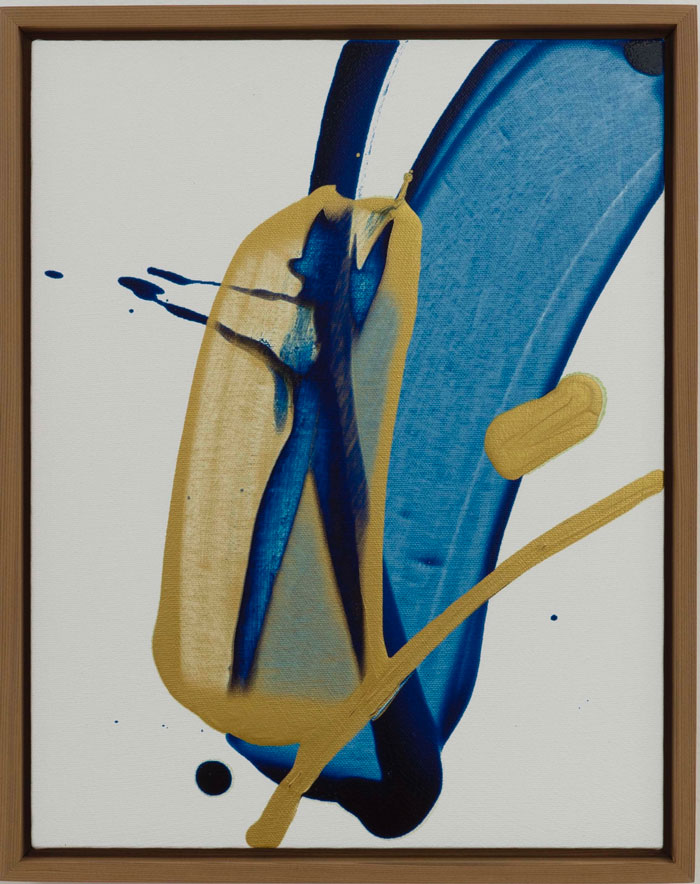 Choi’s bold touch leaves blue strokes behind that create a tense and dynamic image by meeting and overlapping each other as if they come to life. He spreads canvas on the floor and dashes with brushes or spatulas that he made. His paintings mainly show translucent and fluid strokes with different shades of pigment, and the time, direction, and accidental factors of each stroke generate meanings. These coincidental events on canvas extend to the realm of paradox beyond the artist’s naissance and the birth of the universe, the unknown stories and ascription of meanings. He relies on the senses to alternate between the moments of painterly actions and pauses, yet does not miss the sensibility of coexistence and balance. His work has a reserved composition as a whole, but because of the intertwining and mutually influencing elements, a constantly spawning and vanishing Dionysian vitality erupts from it.

His abstract language of varied strokes of each color relating, splitting and overlapping has a formal appeal in the sense that it intuitively represents the conflicting phenomena in life. It reveals the opposing ideas coexist in a latent state. He maintains a balance between contradictions and divisions to understand the world – the universe and life creation, the start and the end of drawing, yin and yang, and even such small things in daily life. “Though not visible to the naked eye, from the camera’s focus that captures the stories of countless stars…” The palm-sized universe he stumbled upon contains everything and a vast universe. Choi perhaps also endeavors to remember his own Aleph – a metaphoric expression by Jorge Luis Borges for a place where every point of the universe from every angle is present yet not topsy-turvy.

The lines and spaces seemingly moving but paused, liberated but controlled on his canvas. They collide and reconcile each other to generate prolific forces. Novel movement is created through repeated tension and relaxation, and expansion and contraction. The heterogeneity penetrating each other continues with life formation. The beginning and the end are in contact and do become one unseparated whole as his previous work titles implied such as Start of Stop, Completion of Departure, and Profile of Moment. Time and motion are understood as the essence of flow. According to Henri Bergson, the beginning and the end are in contact and from the perspective of continuous-time (experienced time), not spatialized time, there are constant changes only. “Duration is the way of pure change, the way of life, and the way of consciousness.” Thus duration inevitably implies totality and heterogeneity. The consciousness of life does not exist discretely but appears as a stream connected. Choi’s work is a part of becoming to create new qualitative differences and expression of constantly changing and acting creatures.

Everything in the world that we meet empirically is changing in such an endless manner. The current period is more attentive to the creation of a world that evolves and coincides and is more enthusiastic for novel creations than metaphysical values, which has changed our perception of fixed reality.

The World and Abstraction

Choi abstracts his perception of the world. When the meaning of objective reality or essence is dismantled in modern times, and the world in which we live is rather abstract, it is not easy to give a distinctive form to such a vast theme of “the world” and “space”. This is only an epistemological concept to show different representations via the course of impressionist art, and this world we think has been thought to be only revealed through images by differences as Deleuze’s philosophy utters. His overlapping strokes with different intensity and strength contest this endlessly evolving world. Meanwhile, blue is often regarded as the most abstract color that gives a feeling of rationality and intangibility rather than passion or reality. Yves Klein also used blue as the invisible and transcendental color that makes ideas visible. Choi also has produced many blue monochromatic works. According to him, blue is the color that is both fundamental and double-sided and best fits the concepts of paradox and balance that he wants to express. In other words, it is the color of the primary things such as sky, water, and earth, and it contains two-sided emotions of hope and melancholy. On the other hand, starting with The Section of Splendor series, the gold color often appears since 2018 as a complementary color of blue, used by the artist to express emissivity like the sun.

With the strokes continuously emerge and extinct, ‘I’ also set a meaning by flowing together, without exception, as a dot within them. This is the Aleph of paradox and it contains ‘I’ and ‘one that contains everything’.

Seung Yoon Choi’s definitive brush touch leaves blue strokes on canvas that move organically, and encounter and overlap themselves to create dynamic images. He expresses the fundamentals of the invisible world with the sensation from color and the movement from the brush strokes. Many of his works are mainly solid blue. It is the color of the essence and ambilaterality for him, which best suits the concept of paradox and balance that he wants to express. It is the primary color of earth when light first encounters the sky and water, and contains both sides of hope and despair, and fervent and cold.

With his custom made tools, he dashes off on a canvas laid flat on the floor, and captures both the painterly movement and the moment of abeyance. His vision of the world’s essence is comprised of oxymoron. He often thinks of such unnoticeable things around us, and reads the world of coexistence and balance between the opposites; the universe and the lives, Yin and Yang, beginnings and ends, and so on.

His lines and spaces are precisely controlled as if they move, collide, harmonize and ultimately come to life on canvas. Some titles of his work such as <Start of Stop>, <Completion of Start> and <Section of Time> suggest that beginnings and ends are parallel and are in contact. They are inseparable whole and ‘one’.

Here we can see that time and movement are understood as a flux. According to Henri Bergson, there are only perpetual changes in the context of eternal time, and thus beginning and end are essentially a single entity. This persistency is a route to pure changes, lives and movements. Hence, it inevitably implies totality. The consciousness of life does not exist independently but unfolds as a continuous flux connected others. His painting is a generative maneuver that creates qualitative differences, and manifestation of repetitively changing lives.

Choi Seung Yoon had a solo exhibition at Young Eun Museum of Fine Arts in 2014. His painting captures the moment when the dynamic lines of colours move organically and overlap.

Choi expresses the essence of the world that is dynamic and at the same time invisible through the screen of speculative emotion. Most of his works are mostly blue, because blue is the color of nature and ambilaterality and the color that best matches the notion of paradox and balance that he wants to express. Blue is also the primary color of nature which contains both sky and water, hope and despair, and hot and cold. Choi ‘s vision on the essence of the invisible world is composed of contradictory elements, expressing the contradictory order and harmony of the invisible world in which the universe and the earth, the yin and yang, the beginning and the end, coexistence and balance. His lines collide and harmonize in space, but ultimately they are precisely controlled in the space set by the artist, just as the organic movement gains vitality. It visualizes that life does not exist independently but develops as a continuous organism connected with others. The titles of works such as <Start of Stop>, <Completion of Departure> and <The Law of Freedom> show that the beginning and the end are parallel but the ends are in contact with each other.