Lightings are usually functional objects that while illuminates in a vast array of ways, seems always to be static in geometry. SUGO sees a solution that requires unconventional thinking and execution in order to stray away from tradition and ascend illumination into a work of functional art. 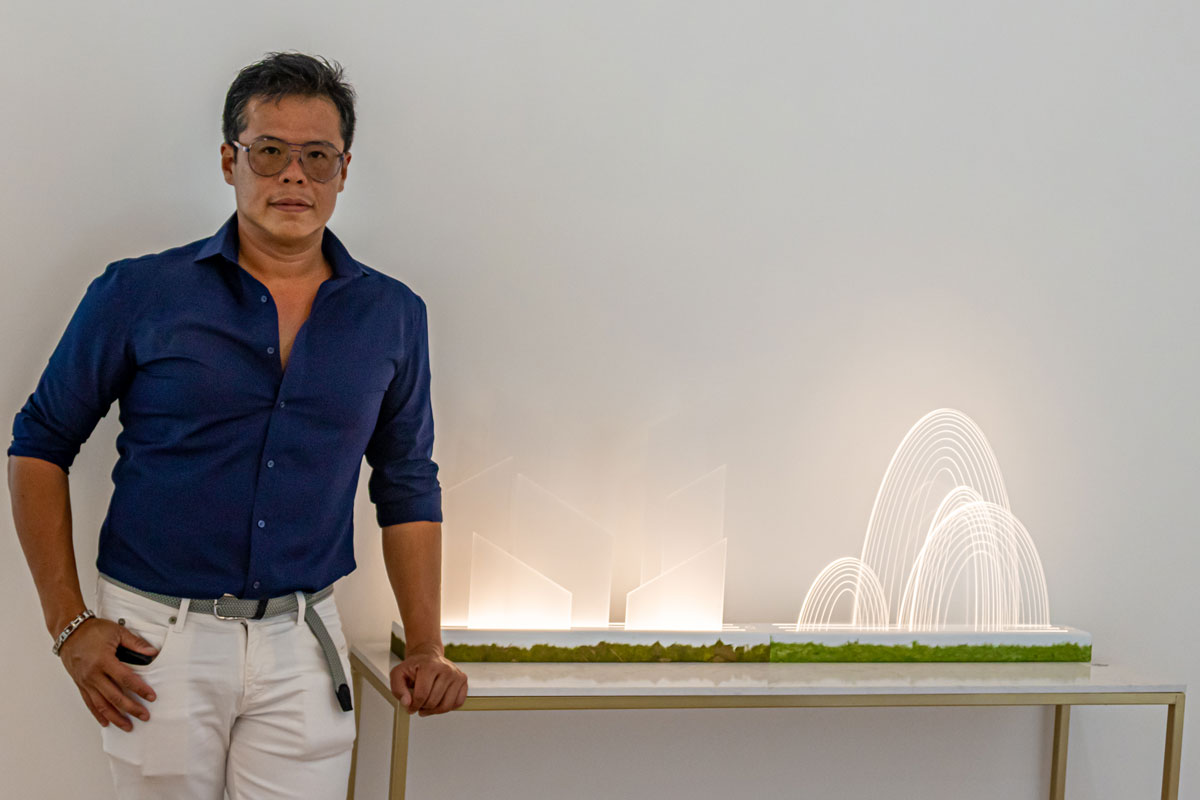 SUGO was born in 2018 with the sole mission of creating ground breaking contemporary Biophilia furniture designs. Started by husband and wife team Kevin Chu and Giulia Di Bonaventura they are serious lovers of nature and wanted to fuse advance sustainable technologies with nature inspired ideas. All the designs focus on working with or giving back to nature.  Within its few short years of inception it has already gathered many awards globally from countries such as Italy, Germany, Japan, USA, China and United Kingdom and is considered by the international design committee as one of the most innovative product creation firms in the world.

Kevin Chu is also the founder and director of COC design based in Hong Kong. Born in Hong Kong he was educated in Architectural Association and Bartlett School of Architecture in London under world renowned architects Peter Cook and Marcos Cruz and was the sole recipient of Bartlett Archigram Design Award in 2001. 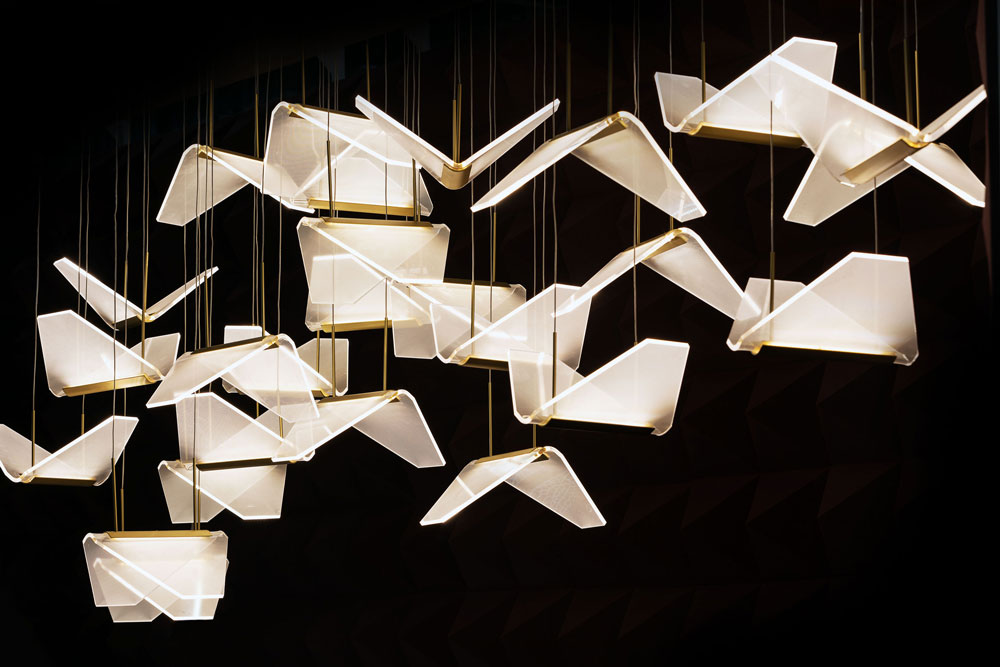 Lightings are usually functional objects that while illuminates in a vast array of ways, seems always to be static in geometry. SUGO sees a solution that requires unconventional thinking and execution in order to stray away from tradition and ascend illumination into a work of functional art. FLY is inspired by all biological entities that can be airborne and seems to defy gravity. It is created to redefine what pendants lamps can be within an interior.

Conceived by simply folding a piece of 8mm thick acrylic with LED illumination placed in the center of design, in either suspended form with its wing tips facing upwards or downwards, it envision itself as flocks of birds, perhaps paper airplanes and even butterflies flying inside an infinite space. FLY’s acrylic wing section is also embedded with the latest photocatalytic technology that can cleanse the environment of virus | bacteria | industrial pollutants, forever, activated only with minimal natural light and circulating air.

The lamp seems to glow only on its “wings” due to exhausting research of ingeniously utilizing indirect illumination in mathematically calculated placement of the design. With its modular system it can bought either as a single piece or as collective clusters of flying objects and can be composed freely in any interior space. The more one installs the design, the more amazing the interior becomes as well as better cleansing the environment.

It is an idea that adds dynamic movement to any spatial enclosure and a tribute to the most vital element of on this planet: Sky and Air while also rejecting the boundaries of gravity. Human’s persistent obsession with ascending into the heavens leads to FLY conception. In nature and our lives we are encased in constant motion and this creation celebrate and accentuate motion in most static interiors. FLY away from life’s mundanity and FLY above all burdens of all social boundaries is what SUGO hopes to inspire. 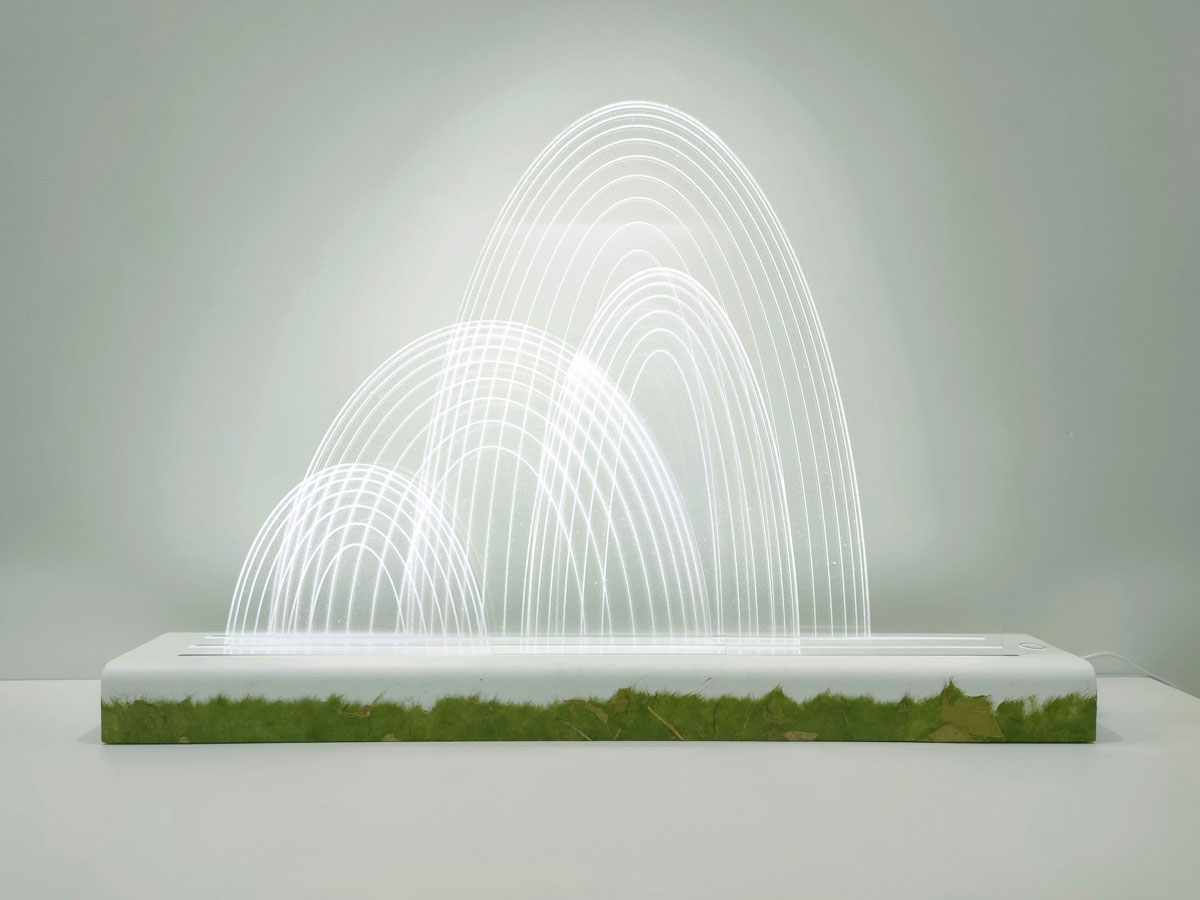 Years ago SUGO design co-founder Kevin went to GUILIN for one of his adventure bicycling trips and he always thought about one day using and element of design to pay tribute to the amazing landscape of this region, which also represent a certain idealization of what most global minds think of Chinese landscape as seen in countless painting, literature and movies of the fabled marital arts periods pieces.

It is here that this lamp is created as a tribute to the amazing rolling hills of Guilin Province in China! With  a rectangular base that is embedded with LED lighting and 5mm thick acrylic panels (SUGO team call them Hills!) in variety of texture and finishes can be placed freely on top of the laser engraved grooves situated on the top of the base.

GUILIN’s acrylic hills are also embedded with the latest photocatalytic technology that can cleanse the environment of virus | bacteria | industrial pollutants, forever, activated only with minimal natural light and circulating air. Once the light is switched on the acrylic hills will absorb the vertical glow into its laser engraves lines and because of the design’s flexibility in geometrical compositions, the hills can be placed freely by the user.  This in effect alters drastically the design and illumination index of the lamp as inspired by the constant changing landscape of this province due to fog, sunlight and shadow transformations in various time and seasons.

GUILIN “Lampscape” put the user into the role of the creator to invent whatever composition is possible. Since the acrylic hills can be replaced easily new designs can be adapted for future collections. GUILIN is not a geometric static lamp but a changeable illumination entity just like the nature it is inspired from. 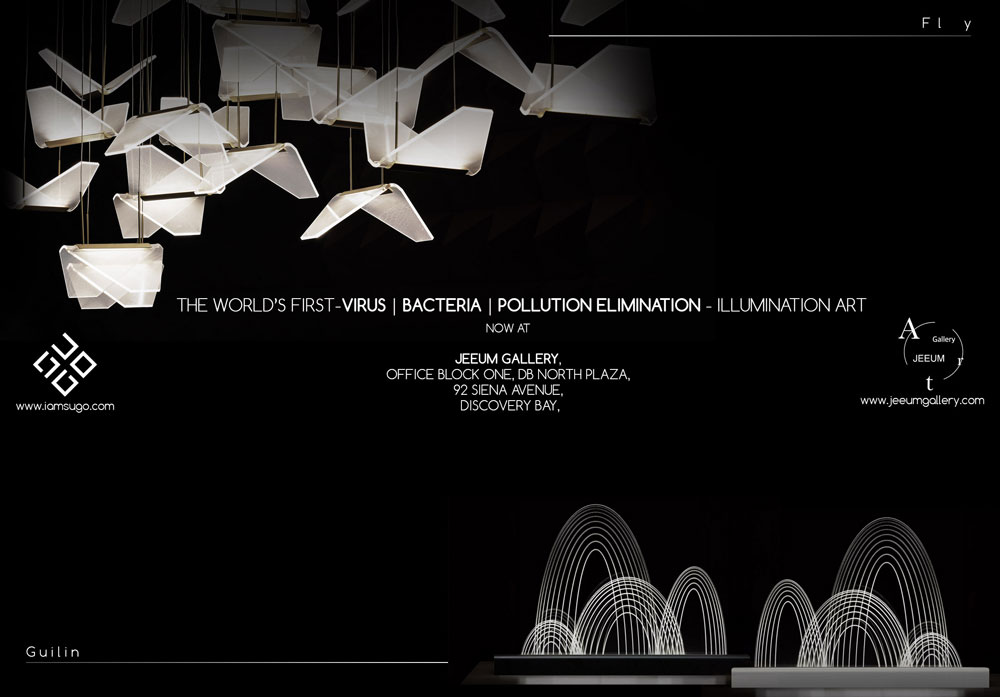