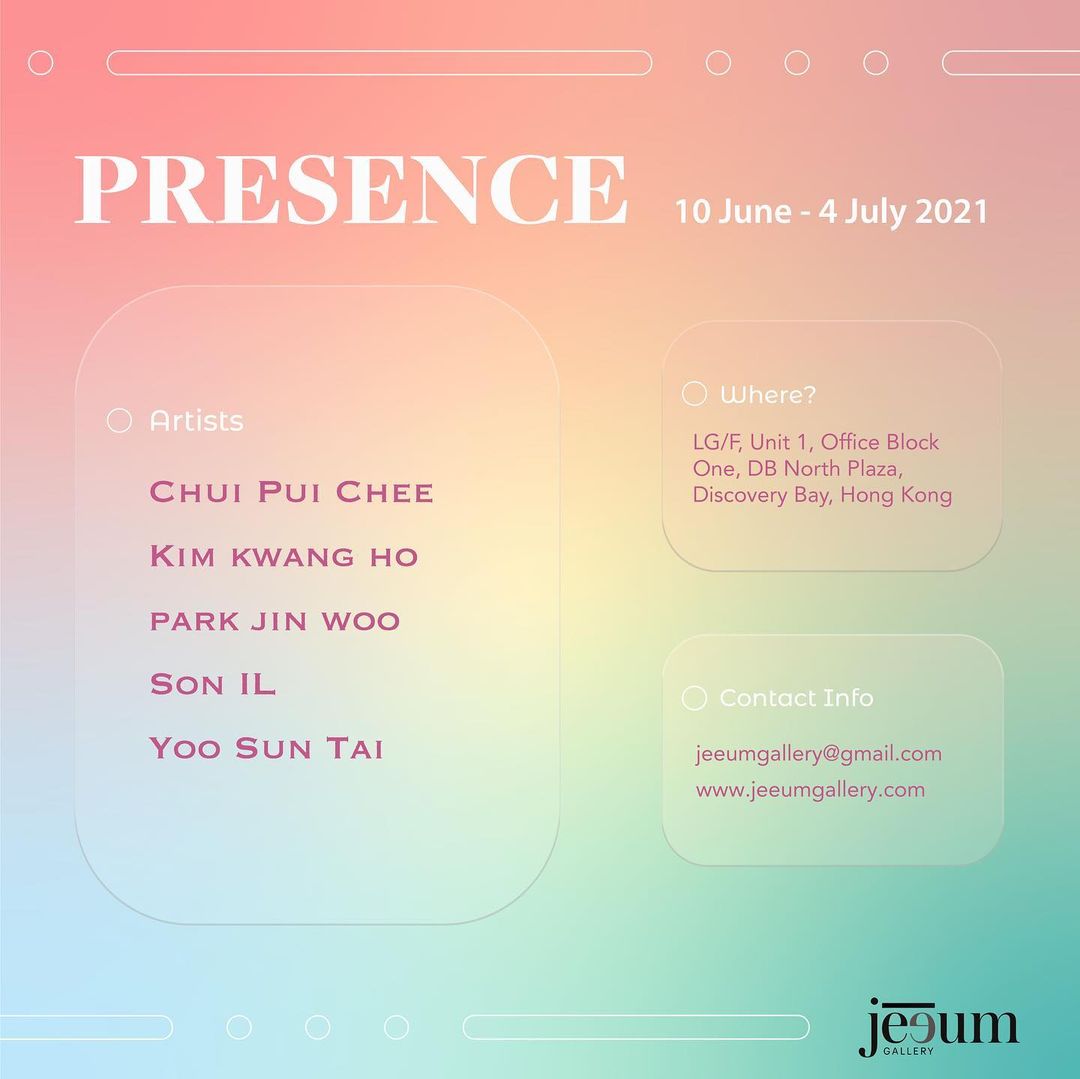 Gallery Jeeum is pleased to present Presence, a group show of 5 artists: Chui Pui-Chee, Kim Kwang-Ho, Park Jin-Woo, Son Il and Yoo Sun-Tai. Following the success of the gallery’s first participation in Art Central last month, this presentation showcases also other exceptional works that did not manage to make an appearance at the fair. Both a continuation of the specially curated visual dialogues and a new chapter for the season, the gallery hopes to bring a refreshing sensation through further works by these familiar names, each with their own style. 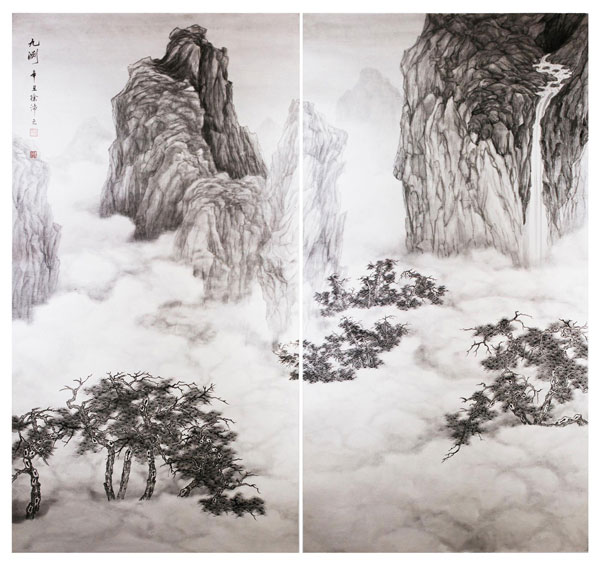 Having received prominent recognition in the local art scene, Chui is a leading calligrapher equipped with exceptional repertoire and expertise. Competent in a wide range of scripts, Chui’s calligraphy exerts a dynamic and vigorous quality, while his painting derives from the structure of calligraphic fundamentals. Some may consider his recent large-scale landscape works of pine trees and jagged mountains in the midst of clouds a deviation from his earlier works that focuses on calligraphy and other smaller subjects, yet they do not cease to catch the attention of us all. Drawing inspiration from the literati painting, a style which emerged during the Northern Song period, this series of works is a reflection of the artist’s experiences and emotions, during and after recent happenings in Hong Kong coupled with the global pandemic. The process of creating the many layers of pine needles with his expertise in calligraphy techniques is especially both a meditation and act of persistence for the artist. Chui finds inner peace in creating this series and he hopes the audience can feel the same emotions as well. 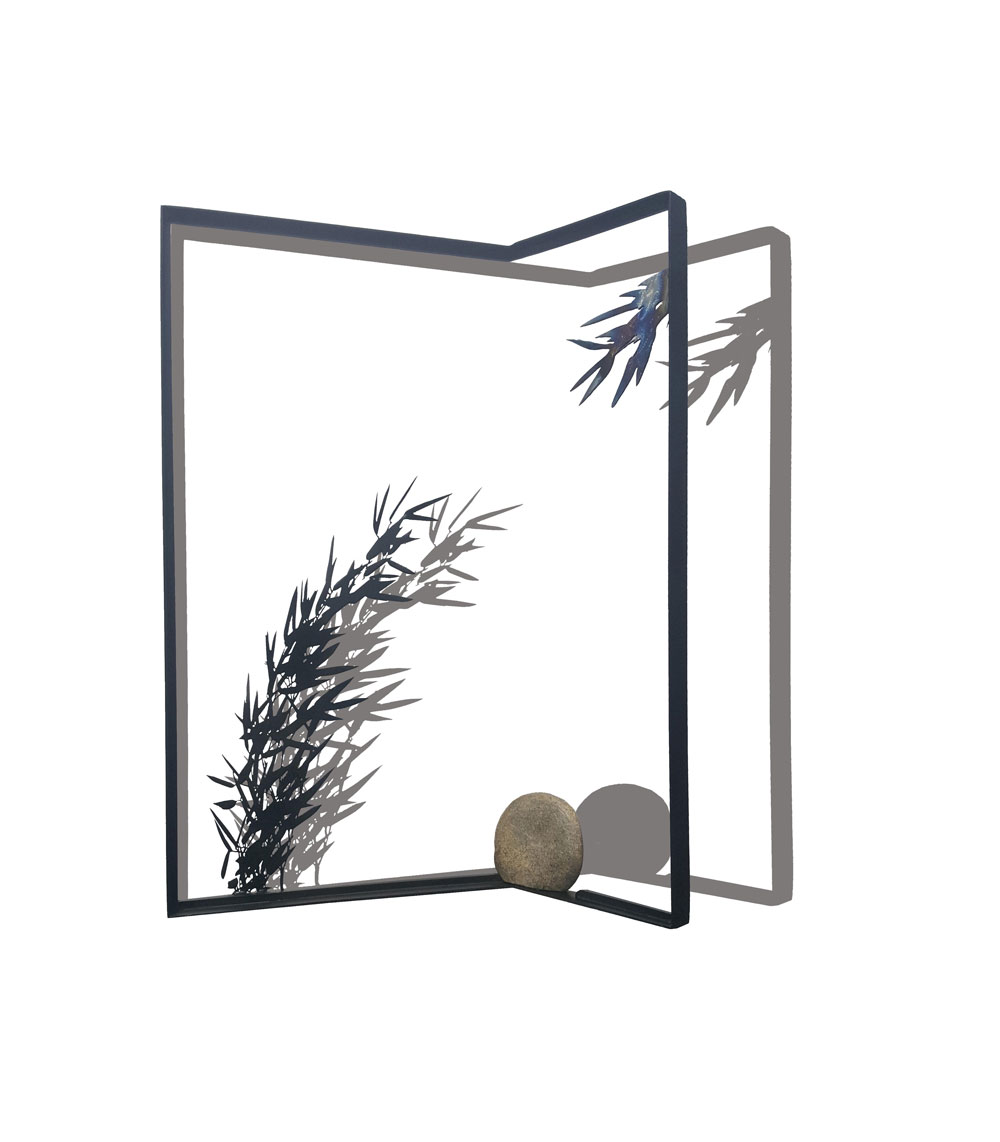 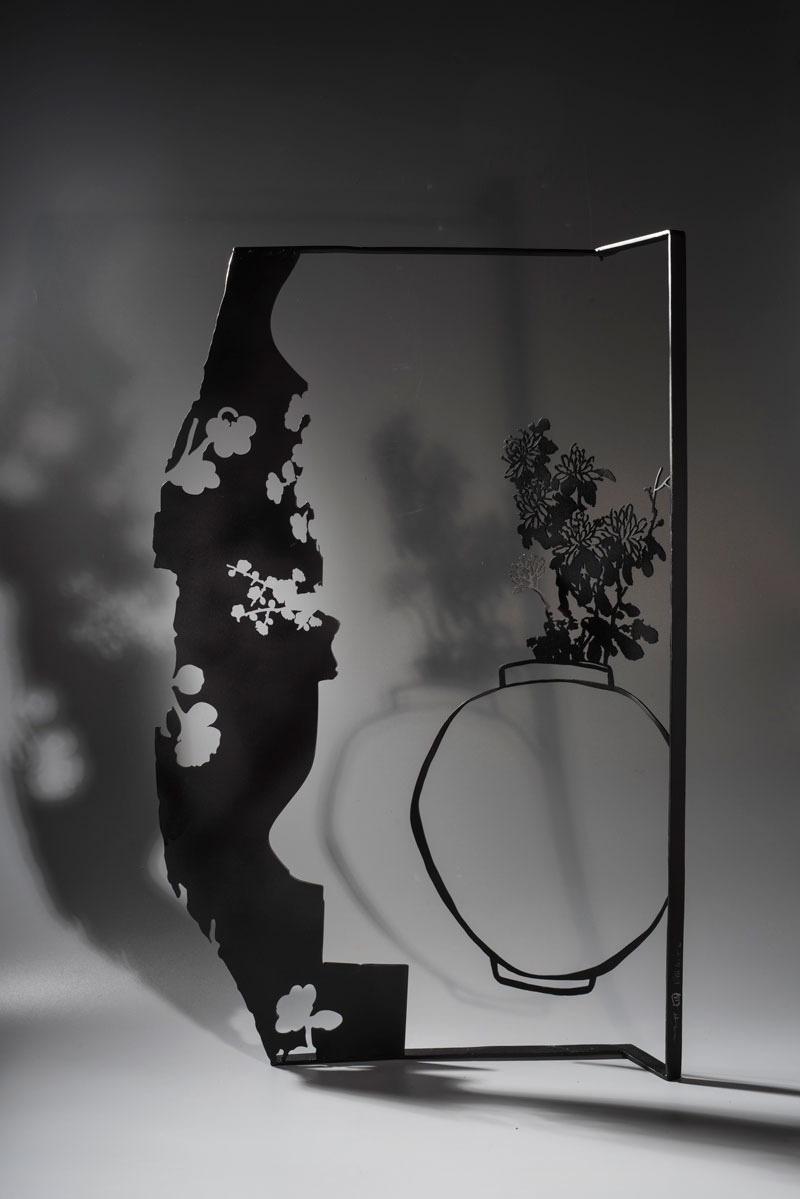 The foundation of Kim’s sculpture lies in shadows – no objects exist without shadows. For the artist, ‘the shadow’ is a methodological instrument to search for an ego and to find an answer to the most fundamental and essential question of human beings: “Who and what am I?” Kim’s subject of focus has always been loyal to the Four Sagunja, also known as the four noble ones or four gracious plants – plum, orchid, chrysanthemum, and bamboo. Using the technique of laser cutting, Kim’s steel sculptures are his own intricate and pictorial three dimensional creations of traditional ink paintings, with a touch of handpicked natural stones. His pieces invite the audience’s gaze to travel beyond the boundaries of the sculptures, extended to the shadows created from the elegantly designed lines and afar, offering a
completely different way to appreciate traditional paintings. 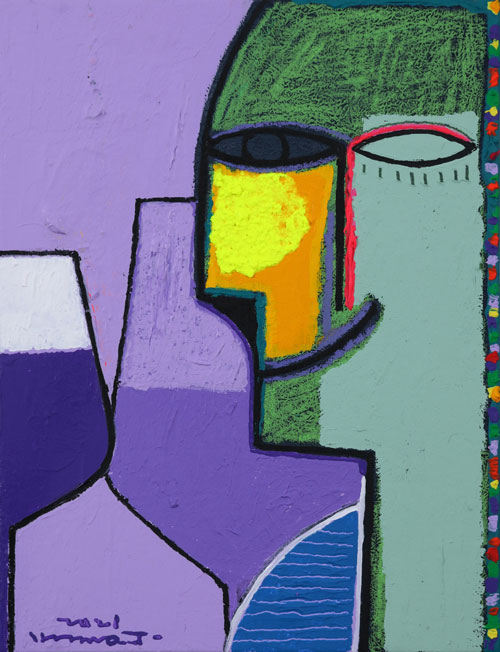 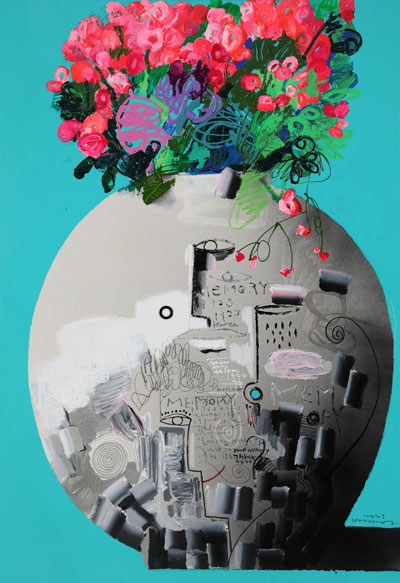 Park’s ‘Think’ series is a nostalgic walk down memory lane. It came about as the philosophical contemplation of the meaning and purpose of art deepened; and began with a retrospective examination of sensibility memory that revives hometown reminiscence. The artist’s inspiration and imagination are without limits. His almost three-dimensional visual creations go outside of capturing memories and the essence of the universe. Park is keen on exploring further into ‘shapes beyond the shape’ (of the canvas) and setting off a journey of awakening life and art that sings the dreams of the future. The conversations apparent in his works is not only about the past and the present, but also ‘fantasy and reality’, ‘abstract and concept’, ‘the original state and the real state’ etc. His smaller collage-like works on boxes may seem to suggest a more direct investigation into ‘thinking’ from his bigger pieces on canvas. Take a closer look to unveil and decode the elements in a myriad of colours and medium that compose the artist’s memories and avant-garde emotional aesthetics. 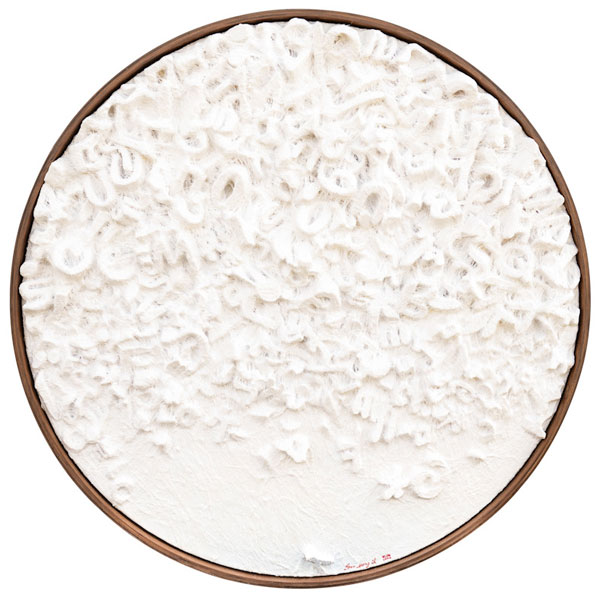 Memories, preservation, and the language of communication is the key idea in Son’s works. After encountering an original Hunminjeongeum (new and native script for the Korean language) book at the Gansong Art Museum, Son wanted to protect and keep Korea’s heritage with art. The artist carved individual letters in a woodblock and those single letters become a unique language communicated through his artworks. It is hoped that the audience not only appreciate the apparent aesthetics of the alphabets, letters and/or emoticons put together but also make effort to find out what is behind the language of essence. Although presented on smaller circular panels, ‘Unsent Letter 1503’ and ‘Unsent Letter 1501’ offer a rather intimate and luring sensation no different from ‘The Day and Night’. These pieces symbolize a form of communication with others but at the same time, represent the most private, inner emotions yet to be expressed, by the artist or even the audience. How many unsent letters do you keep with you? 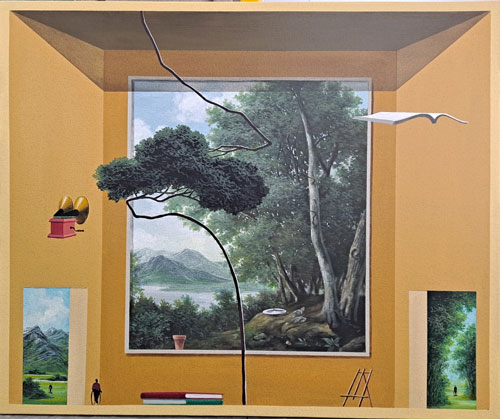 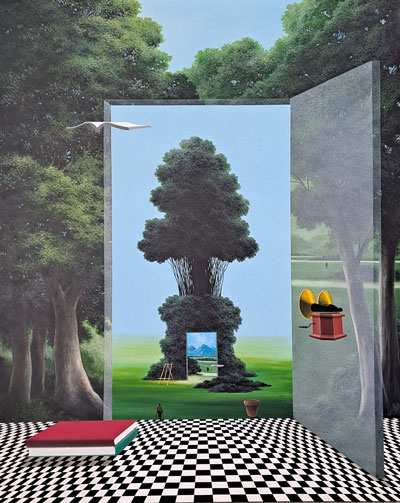 Yoo has developed his now well-known style of surreal three-dimensional painting over years of experimental art practising. The artist is obsessed with objects such as book, typewriter, ladder, clock, bicycling man, bronze, apple etc. He takes such items as means of metaphors of life elements whose meanings depend on personal imagination and interpretation. As an intuitive painter, Yoo strives to transcend mere representation by tapping into our deeper connections to these objects and what they have come to symbolize. An apple can symbolize the fall of humanity, along with millions of interpretation of the same object through a never-ending range of cultured understanding among us. By presenting these objects within his dream-like settings, away from what he describes as a ‘sea of words’ that surrounds us, Yoo asks us to freely project ourselves into his spectacle world of sights and sounds, of a surreal fantasy.